Getting Day Old and Past Air Density Data for Tuning

After numerous requests, historic air density data was added to the track listed in airdensityonline.com. Now race tuners can retrieve past air density data for race tracks and courses all over the world. Here is an example of one of 23 racing facilities listed for North Carolina, USA. A screen snapshot is shown for air density / density altitude / water grains data for Coastal Plains Raceway Park in Jacksonville for March 30, 2019, approx. 11 am.

For the site selected and the current time of the viewing, air density, density altitude, water grains, and other key weather info are all displayed.  Data is accessible from mobile or stationary web devices.  Clicking on the “forecast” link (shown on the lower-left of this screen snapshot), an hourly forecast appears that is used by racers world wide for event tuning plans. 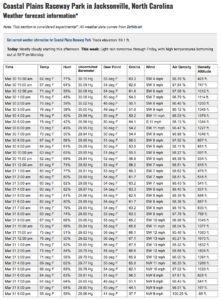 Next to that link in the first screen shot, a new link was added, “historical”.  When that link is chosen, the previous day’s hourly air density data is shown.  A screen snapshot is shown for that list. 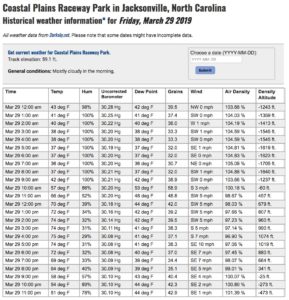 After a hectic day of racing, a tuner can look up weather data for the previous day with air density units already calculated.  The tuner can better reconstruct air density records for the various racing rounds for that outing. 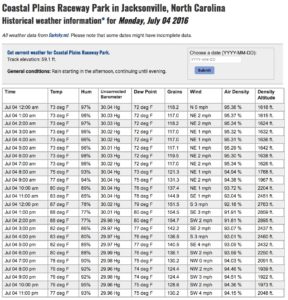 US Race Tracks & Courses List Link:
US Race Tracks
Note: over 500 tracks listed throughout the US, most racing with mechanical fuel injection.