We found some interesting nitro stats in a recent racing history search. Art Malone was one of the frontrunners in the mid 1960’s in Top Fuel drag racing. Note the following:

Art’s combination in the front-motored Top Fuel dragster ran record competition all over the US in AHRA & NHRA quarter mile drag race events.

We fired up our ProCalc calculator to analyze the setup: 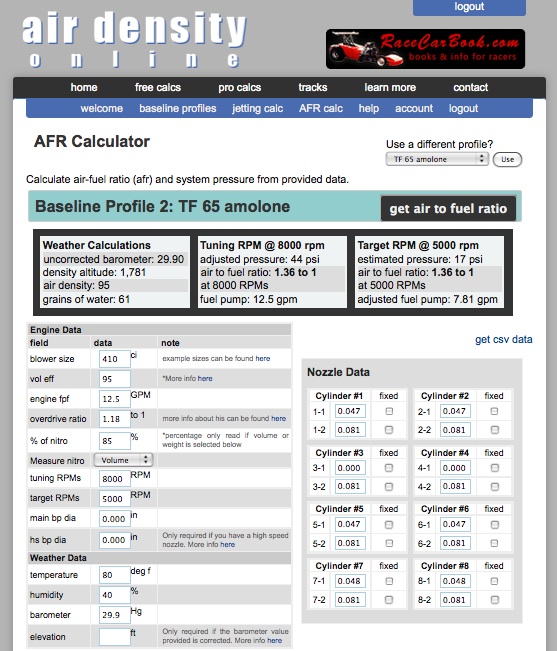 This profile is currently set up in Pro-Calcs as a pre-programmed
“Select a sample baseline: TF 65 amalone“.

Art’s jetting layout was 4 hat nozzles (above the blower) and 8 port nozzles (below the blower). Don Enriquez, Hilborn Fuel Injection master, confirmed the fuel pump size of that time of 12.5 GPM. A 6-71 blower of that era has a displacement of 410 cubic inches that was entered into the calculator screen (shown above). The calculator determined an air to fuel ratio of 1.36 to 1 from Art’s setup and common weather data. That is considerably leaner than AFR’s of today in the current Nostalgia Top Fuel combinations. They are typically at an AFR value of 1.1 to 1.

Air to fuel ratio is a critical design value in all engine development:

So for every 13 cubic feet of air going through the racing engine, a pint of fuel goes through it at a 1 to 1 air to fuel ratio. Pro-Calcs determines both of these values from weather and engine data. Pro-Calcs computes air to fuel ratio from those values “per engine revolution”. This standard, “per engine revolution”, greatly simplifies tuning analysis & decisions. Small adjustments in fuel make a big difference in maximum performance or engine damage.

Going back to the Nitro History example, that leanness would explain the limit on blower overdrive to 18%. Much more overdrive would be leaner yet. That also explains the need for a typical low static compression ratio of 6.5 to 1 for that combination and era. Between our historic search and old memories from the time, Top Fuel drag racers would use only as much blower (18% typical) and timing (30 degrees typical) that they could that would not burn up the engine. If any more compression, overdrive, timing, or nitro percentage were used, engine damage was inevitable.

The dynamic compression from a combination calculates out to about 15 to 1 (Ref. Fuel Inj book, Section 16.5, Methanol book, Section 9.10, Nitro book, Appendix 2). Dynamic compression is a combination of the static compression and the boost. That 15 to 1 compression ratio value is one reason these old 375 horsepower engines from the 1950s made over 1,100 horsepower in the mid 1960s.   That high value is similar to dynamic compression in the current nostalgia Top Fuel as well as Professional Top Fuel combinations. That high value in all three cases is dependent on fuel enrichment for inter-cooling to inhibit detonation. Fuel enrichment of over 85% is common. The amount of fuel enrichment for detonation control is well explained in our Methanol book & Nitro book. It is explained with numbers that relate to the different applications.

That high value from each of the three combinations is achieved with a different engine size, nitro percentage, and blower size. Using the Pro-Calcs tool for different air densities, a jetting combination can be adjusted to reproduce a proven air to fuel ratio. It becomes a simple numerical task. As I investigated different combinations using ProCalc, it became apparent that trial-and-error adjustments for air density changes are risky without numerical computations. It is likely that damaging combinations would be more frequent outcomes from the alternative trial-and-error guestimates.

In the 1950s, a group of racers around the world ran nitro racing engines. Those competing in the top ranks were all using similar setups of that time. The group collectively determined jetting, spark advance, compression, and blower overdrive limits. Trial-and–error was the method. Collective data shared between competitors and through suppliers resulted on a combination that was maxed out. In the 1960s, the same method was used. A group of competitors collectively determined a faster combination with gradual improvements from better parts and more trial-and-error learning. Parts breakage was frequent and always the humbling lesson. That was repeated in the 1970s and thereafter. The collective cost was extensive. The performance in each era was a result of that collective trial-and-error R & D. Breakage certainly limited many of the advancements. Recent advances such as ProCalc can provide numerical analysis & control that can now significantly reduce breakage.

With Pro-Calcs, different combos can be evaluated for a different air temperature, for example. Blower overdrive can be adjusted so that the same proven air to fuel ratio can be achieved. For example, the previous baseline was at 80 deg. F temperature.

In our previous experience in different air densities and track altitudes, jetting and / or blower overdrive would be adjusted in our drag racecar to always maintain the correct air to fuel ratio. From that, it performed very well staring with our first run right out of the trailer. That would include any new day or location.