Below is an archive of past newsletters. If you wish to receive these newsletters as they’re sent, fill out the form in the sidebar with your name and email address and we will add you to the list.

11/19/2019 – Preparing for the 2020 racing season – tips and tools
Another racing season is behind us and we are spending the holiday season preparing for next year. Below are some tips and tools to help you get started. You will find most of the publications that we wrote will provide tuning technology that goes way-way-way beyond other sources. Few other books are written for the racing that we cover. The common trial-and-error alternative is way more time consuming and expensive.

6/5/2019 – Oxygen to fuel ratio, how-to videos for FI jetting and more
A new and powerful tuning tool for racing is introduced: oxygen to fuel ratio. ‘How-to’ video links are provided for our ProCalc FI jetting calculator including setting up jetting, tuning for weather, and nitro tuning.

11/10/2018 – New Phone No. / Address, Good Fuel Pressure with a New MFI System, New Tech Articles, New Airdensityonline Tech Info
We moved to the Rancho Cordova suburb of Sacramento, California with a new phone number and business address. Fuel pressure is described including a real simple math analysis from our books. Jennifer was busy writing tech articles for racingjunk, engine labs, dragzine, and airdensityonline. She was busy adding racing facilities onto ADO from all over the world. The tracks list of over 600 was separated into US tracks & International tracks.

Rons mechanical fuel injection throttle bodies are rated by engine size capability and typical horsepower capacities. Ratings from racecarbook and from Rons fuel injection are provided. The frequent and troublesome idle lope that occurs in MFI with blowers is analyzed. New racing track links that now appear on AirDensityOnline: Tracks from around the world are shown. Air density / density altitude values in English or metric, south of the equator, can now be accessed from airdensityonline.com. Our recent new tech article links that appear in Engine Labs on-line magazine are provided.

Air flow CFM fundamentals of Roots blowers are reviewed for 6-71 and 8-71 blowers. Gains from the use of larger fuel pumps with inlet restrictors over smaller fuel pumps are covered. Anti-stumble in circle track racing is covered. New tuning services from Racecarbook.com/Airdensityonline.com are covered. Recent articles are listed from Airdensityonline.com, published in Engine Builder & Engine Labs magazines.

Pulsing the fuel curve in a mechanical fuel injection combination for more horsepower is reviewed. How the peculiar fuel pump rule in Nostalgia A-Fuel Dragster racing is a boom to performance. Our new ProTuning & Advanced jetting calculator packages are reviewed. Links are provided for perfect gifts for Father’s Day or birthdays. Those include several free technical publications that can be downloaded.

Fuel injection tuning limitations from status quo practices are explored. A new Pro Tuning package is presented from Racecarbook.com for fuel injection racers. Our new fuel injection book for normally (naturally) aspirated racing engines is again reviewed. Links are provided for perfect gifts for holiday or birthdays. Those include several free technical publications that can be downloaded.

Fuel injection tuning is presented that results from racing class rules limits. A normally (naturally) aspirated A-Fuel drag race application is described. A circle race tuning example is provided as well. A performance problem from fuel enrichment for cooling is presented. Use of air to fuel ratio for idle setting is presented. A booboo with flared jets is described.

In this newsletter, we are announcing our new book: High Horsepower Tuning for Mechanical Fuel Injection for Normally Aspirated Racing Engines. A budget blown nitro racing example is highlighted for a half second ET improvement from a budget drag race nitro setup. Checklists for racer preparation at the race track are featured. Updates to our ProCalc fuel injection jetting calculator are highlighted. Links are provided for perfect gifts for holiday or birthdays. Those include several free technical publications that can be downloaded.

In this newsletter, we are announcing a soon to be released new book on fuel injection tuning. Highlights of our trip to the 2014 SEMA show are provided. A world champion Pro Street turbocharged methanol combination is featured. Racing tech info from the Surfers Top Fuel racing team of the ’60s is reported. Some lift specs from launching the lifter off the cam lobe for more horsepower are reported. Checklists for racer preparation and arrival at the race track are provided.

In this newsletter, a link is provided to sign up for a free tryout of our Pro-Calc app with four on-line FI jetting calculators. In the technical department, a fuel injection nitro tune-up was researched & reported. It is about a successful Top Fuel drag racing competitor from the 1960s, Art Malone. The jetting & setup for his national event winning blown nitro combination is analyzed. In the racing preparation department, Checklists for racer setup just prior to race day are provided. Fuel distribution for front mounted Roots blowers is reviewed. Torque peak vs. horsepower peak excerpts are included from our methanol racing fuels book. Links to other Checklists from previous Newsletters are included.

A technical analysis of a low nitro percentage record holding drag race hydro for 1968 is featured. Potential power increases from 30% nitro by weight or by volume are analyzed. Fuel mixture amounts and jetting is reviewed. Wheel lug nut safety is reviewed in a wheel stud failure example. Shear strength from friction in riveted aircraft structures is used to illustrate the importance of proper attachment between brake rotors or drums and the wheel hub that holds the wheel. A link to a previous Newsletter 4 is provided for reference to US taxes regarding racing as a business.

A lot more info is proved for the Fall racing season. We are busy using our new Blown Nitro on a Budget book for all kinds of nitro tuning for unblown & blown engines. Several successful examples of low percentages are provided. More racetracks around the world are added to Airdensityonline.com. Nitro is added to Pro-Calcs. Checklists for tow vehicle and trailer preparation are provided. More on driver relaxation breathing is enclosed. Tech info for Top Fuel clutch operation and engine speeds is provided. A vital tip is covered about parachute safety at the starting line. The temperature for park plug plating discoloration was investigated.

Lots of new things are happening this summer! We are excited to announce our newest release, Blown Nitro on a Budget. This is also the start of a series of “Checklists” to use as reminders. More information is provided about preparation for a new driver. With that, information is provided about Hilborn nozzle sizes that relate Hilborn nozzle flow numbers with the approximate nozzle diameter. We are expanding applications for our online jetting calculator, and adding links to perfect birthday gifts for the summer at the end of this issue.

Links to perfect holiday and birthday gifts are provided in this issue. In the technical department, information is featured about fuel injector nozzle design & function. For new drivers who may be apprehensive about getting behind the racer’s seat for the first time, very powerful Yoga relaxation techniques are provided. There is more on numerical tuning control. I also added weather corrections for tuning that are compared to weather corrections for horsepower output. 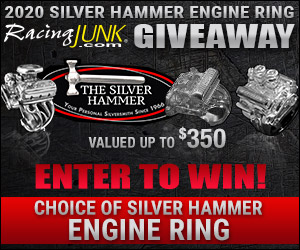