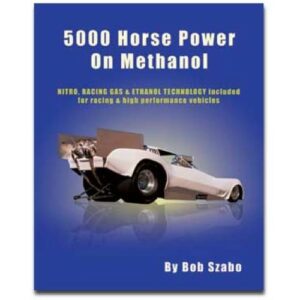 This 300+ page manual is the most comprehensive source about methanol for racing.  Much of the content is applicable to nitro for racing, and racing gasoline as well.

TECHNICAL INFO IN THIS REFERENCE:

CURRENT & FUTURE: The presentation goes far beyond anything ever published for racing methanol. It is all about methods that are within current racing rules as well as innovations that are beyond.

INFO FOR ALL POWER LEVELS:
(1) Applies to various power levels & engine sizes from one half horsepower to 5,000 horsepower. Setups for EXTREME power levels on methanol.
(2) Information in the book is written around the 4 cycle engine. However, much of it applies to 2 cycle engines as well as rotary engines. Where the information applies to those designs is included as well.

View the table of contents

We received feedback from many of our readers/racers. See what they have to say.