Outlaw ProMod drag racing setups with mechanical fuel injection are hitting over 4,000 horsepower. The oversize PSI screw blowers at high overdrive ratios are common. These are not legal in most national drag racing classes. But in eighth mile outlaw racing, they are common. Horsepower levels in the 3,000’s are typical on the launch with a whole lot of power added from ram air from large injector scopes pushing through 200 MPH trap speeds. The combination is reaching over 4,000 HP at the high end.

Trap speeds over 200 MPH in the eighth mile are a result of that level of power. Tire spin is a common limit. Superb racetrack preparation is a must. One of our ProCalc customers said they were reading power levels in the mid 4,000 range. Anything over 3,500 HP would black track the tires all the way to the finish line.

Constant flow, mechanical fuel injection setups are common feeding 15 GPM methanol at the top engine speeds. Adjustment of the main bypass is an easy tuning tool for air density compensation. Maintaining air to fuel ratio in the low 3’s is a common number. As the air density changes, a simple change in the main bypass can be done to maintain the best air to fuel ratio.

One of the combinations for these monsters goes beyond a steady air to fuel ratio. The fuel mixture is changed several times in a run by bringing a high speed bypass off and on. The routine, also called teasing the motor, is as follows: 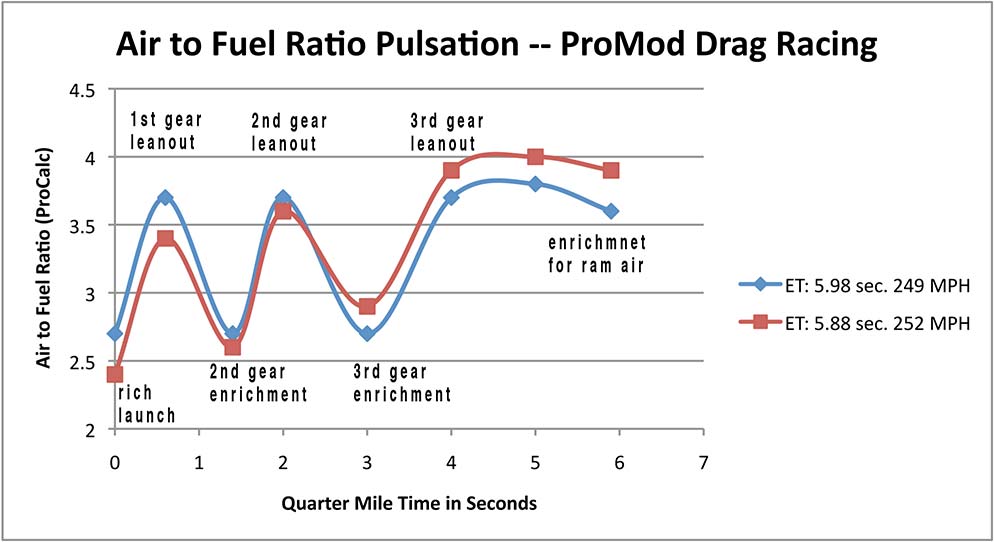 The various AFR values for two different jetting profiles were developed from our ProCalc data using a fuel injection setup and were exported to a spread sheet program. This chart was created with the spread sheet toolbox in order to provide an obvious dramatic illustration of an AFR pulsation fuel map for the different performance results.

It is also done with several high speed bypasses. A different one is used in different gears. However it is advisable to have good data management as this can become complicated to keep track. ProCalc is one such method of tracking data.

When this jetting combination was first profiled on our calculator, we realize this is impulsing the fuel curve. Air to fuel ratios can be controlled with specific jetting sizes to a typical combination (shown for a Hemi head engine with overlap flow losses):

The combination is balanced to almost melt pistons on a run.

The high speed can be closed to add fuel for the high end ram air approaching the traps.

The lean condition is overheating the combustion chamber, making great power. When the gear is changed and the engine goes rich, the reduced power softens the power pulse to the tires from the gear change. The cool time allows the pistons to conduct heat away from the dome into the oil. Then the process repeats itself, and a surge of heat is again applied to the combustion chambers, piston domes, and valves.

This function is just like many other applications of pulsation.

Example 2: The surge of diesel fuel in the power stroke of a compression ignition engine is pulsed by the newer fuel injection systems. Multiple pulses of fuel in one stroke cause reduced noise and improved combustion.

Example 4: The 4 minute running mile was surpassed only by interval training where the body is pushed to extended efforts in intervals then rested in-between in intervals. Increased conditioning was the result. Pulsing extended straining efforts and rest periods is a method to build endurance that steady state training did not historically do.

Back to Racing Fuel Injection

In the other extreme of a fuel injection tuning with a steady state fuel curve, there is no high speed bypass going off and on. The engine runs a constant amount of fuel per revolution.

Even in a conventional normally aspirated engine with a high speed bypass, the single high speed opens around the torque peak and flattens the fuel curve. While there is a single high speed event, the transition is gradual so the fuel is not impulsed. It is fed at the rate of engine demand.

The pulsing alternative is just beginning its evolution in various racing categories. It is easy and fun to manage with ProCalc where bypass jetting at each time interval can be determined for weather corrections or tuning to meet air to fuel ratio targets. 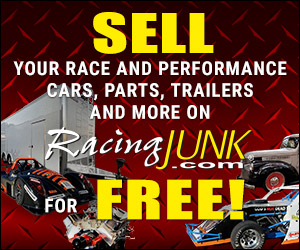