Key elements for drag race engine tuning are having a well-tested fuel system setup, tracking the weather for changes in the amount of oxygen in the atmosphere, and properly adjusting the engine for the current climate. One element specific to mechanical fuel injection tuning is idle adjustment for a good starting line temperature. Engine oil temperature reaching more than 150 deg F and less than 180 deg F are reasonable. This is done with tuning the idle RPM and fuel amount. Good temperature at the starting line with proper amount of fuel at launch provides the best 60 foot time. Proper fuel amount for the best mid-range power is often a bit leaner than the launch. The best high end fuel amounts are with provisions for ram air contributions when a forward facing air scoop is used. Each of these can be very well managed with air to fuel ratio tuning.

Tuning knowledge is key. Tuning knowledge can be ‘experience-based’ and/or ‘data-based’. Experience-based engine tuning is a result of personal and shared knowledge from various sources. However, good tuning knowledge is in short supply in many regions. As a result, racers become dependent on outside sources such as suppliers, online forums, and word-to-mouth. Unfortunately deciphering whether the information is good or bad is challenging. Learning more about the science of your setup and making your own database is often the best.

Data-based tuning can be made up of visual, sound, and/or odor. Additionally, data can come from gauges, on-board instrumentation, a prior dyno test, a prior flow bench test, and/or proper calculations. Good data-based tuning comes from a good selection of data sources. We see some racers with fully instrumented drag racecars, often with little knowledge of the data generated by those instruments. Investing the time to learn about good data analysis should go hand-in-hand with any new data source.

Engine tuning is also dependent on the competition category. Tuning for a bracket engine such as Top Dragster is done for consistency or predictability. For bracket racing a conservative fuel mixture and engine timing are far more important than a lean-burning, max-power, spark plug melting combo. Tuning for unlimited classes such as Top Alcohol and Competition Eliminator is done for the best performance and that may involve a more volatile setup.
In both of these categories, tuning for air density changes is important. Air density percentages define the changes of the weight of the air going into the engine with weather or altitude changes. Numerically controlled tuning for optimum air/fuel ratios with air density changes becomes precise. ‘Guestimate’ tuning is a common alternative for fuel system adjustment and often the cause of engine failures.

When air density goes down, the weight of the air is reduced. To stay in an optimum air/fuel ratio range for many engines, the fuel should be reduced. This applies to naturally aspirated engines as well as supercharged engines with overdrive limitations. Top Alcohol and Nostalgia Top Fuel are examples where supercharger overdrive limits are applied and the supercharger overdrive is not changed. Those can benefit from air/fuel ratio tuning with jetting changes. Mechanical fuel injection, common in these classes, benefits from tuning simplicity since the overall air/fuel ratio can be managed by a single bypass jet. A bigger jet is used to lean it. A smaller jet is used to richen it.

In bracket racing with a supercharged engine and without supercharger overdrive limitations, the supercharger overdrive can be increased to compensate for lower air density. For example, we ran our supercharged engine in 7.90 second NHRA bracket races with varying air densities from 100% down to 90%, adjusting our blower overdrive from 5% up to 15% to compensate. We determined the scientific relationship between air density and blower overdrive to reproduce a constant power level. We were able to maintain near 7.90 second ETs throughout a typical event, from a cool morning to hot afternoon to cool evening. No other tuning was necessary. We could also maintain near 7.90 second performance from one local to another with this tuning method.

For normally aspirated engines or supercharged engines with overdrive limits, tuning to maintain the air/fuel ratio is different. It involves adjustment of the fuel amount with the air density. Lower air density needs less fuel. Higher air density needs more fuel. A very reliable scientific relationship exists between the two that makes tuning a simple numerical control task for these engines as well. 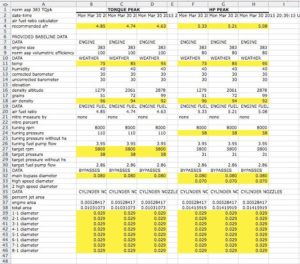 In our supercharged alcohol burning Hemi V-8 combination, we found the following:

*not always a reliable indicator by itself

Air density data: We provide an air density data source for various NHRA tracks. You can find it at: Race Track Weather. Track location, altitude, and the current weather are accessible through a smart phone or web device. 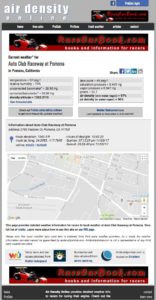 Example of display of current air density, water grains, and density altitude data for tuning at Pomona Raceway from https://airdensityonline.com/tracks/; this data is provided year around for NHRA tracks

Air density forecast: A most unique three-day forecast is also provided from this source showing air density, water grains, and density altitude.  For tuning preparation ahead of time, this is a unique source for that data.  It is really good for determining tuning spares that you will need for a weekend before you get to the track. 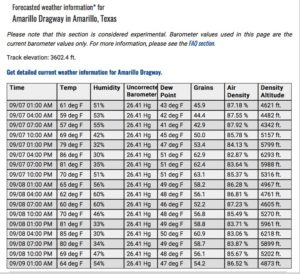 Air/fuel ratio tuning in the field: With the expansion of telecommunications, we developed a smart phone calculator, ProCalc, to determine fuel injection jetting for precise tuning with air/fuel ratios.  It is accessible from ProCalc to provide portable tuning capability in the shop, travel, pits, and staging lanes. 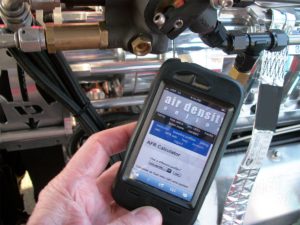 Precise air/fuel ratio tuning data for a normally aspirated or forced induction engine; for various drag racing fuels; from the racer’s smart phone using the ProCalc program; accessible on multiple devices at the same time; for tuning data communication such as between shop & track, or pits & staging

With ProCalc and the Airdensityonline.com forecast, an entire tuning plan can be constructed ahead of time for mechanical fuel injection to help relieve the pressures of tuning at the track.  We would customarily determine our fuel injection jetting for the entire weekend during the previous week, before an event.  Air/fuel ratio tuning was so precise that we could follow that tuning plan throughout the weekend, and racing was a whole lot more fun. 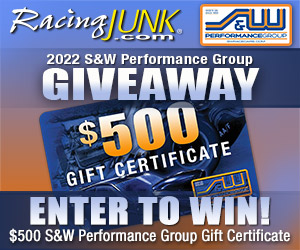