Methanol fuel is very popular in motorsports.  It is common in drag, circle, and boat racing for example.  It is readily available and reasonable in price.  It has favorable properties as a racing fuel such as wide tuning window and good tolerance to high compression or high boost.  However, it is a hazardous organic compound in vapor or liquid states as well as in mixtures with other liquids.  That hazard is misunderstood by many who race with it.

Screen shots are provided from our tech manual, 5000 Horsepower on Methanol, to illustrate some of the safety issues: 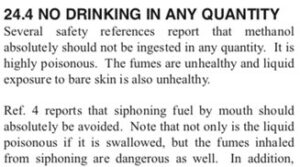 Added info on safety issues are highlighted in our methanol fuels publication:

Note: It is reported that there is variability in skin absorption characteristics between different people.  Some are more susceptible to medical problems from skin absorption than others.

For example, I am particularly sensitive to methanol exposure.  Any time I had even a small amount of racing methanol on my hands or a splash on my arms or legs, I would get a splitting headache within 5 minutes.  Some others around me did not seem to have that sensitivity.  Rubber gloves, sleeves, and long pants became a common part of my pit clothing.  Also, safety goggles were soon added to protect my eyes.

Occasionally in the pits, a passerby with a lit cigarette or cigar would walk up to watch or talk.  I did all I could to keep a distance from them or stop until they put out the light.